It all started with a question asked at a staff meeting – What shall we do for Armistice 100?

Now, at Denham Green E-ACT Primary Academy, there is a sombre display both outside the premises and indoors.

All the pupils were told about the Armistice Centenary and have worked on poppy activities, as well as English work, which ranged from a sentence describing an armed forces’ uniform to stories, diaries, letters, poetry and fact files based on women and the armed services during WW1. 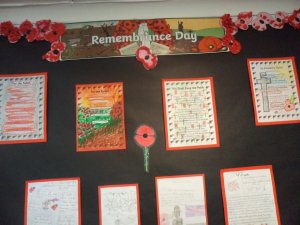 The outside display of a kneeling and standing soldier by a cross, was drawn by Mrs D Smith and then cut out by the caretaker Mr M Squire. The poppies flowing down the building were made by a variety of staff. 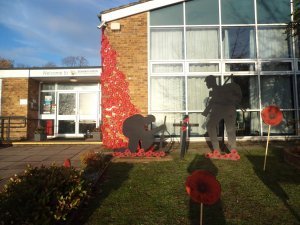 The final moving piece took place on Friday 9th Nov when the KS2 children had a Remembrance Assembly led by Ms J Ashley and Y6, followed by the laying down of a large poppy wreath in front of the Remembrance scene outside.

The school reflected on how life could have been different; remembering family members and friends who were and are still being affected by war and conflict today.

A parent commented, ‘ What an amazing display, I felt quite emotional.’

School will re-open on Thursday 3rd September for children. Uniforms can be collected on 1st September, please pay on Parent Pay before collecting as we cannot accept cash.